Under the bonnet of Big Blue Car's album 'Let's Radiate!'

Under the bonnet: 'Let's Radiate!'

When writing about a character I try not to use names of people I know or have come into contact with in the past. I don't wish for people to think the song is about them, and also it makes me think about their personalities rather than those of my imagined character.

Because of this I'll often obscure names or reduce them to single letters. The dates listed however are accurate. They really did exist (!) and I remember them all very well.

Those individuals, just like their short-lived thoughts, fell off some radar when no one was looking. Reading them back, the little broken passages can only generate speculation and further questions as to what they meant or were truly thinking about at the time. Diaries can be flicked through in minutes, while rushing through a complete lifespan takes a little time until we realise that time itself is in short supply.

It's only then that the words worming from the pen become an habitual test of worthiness at the sight of an impending mortality and the orderly writing down of an unordered life. Why do we, the underwritten do this?

Perhaps it's to pass on some small historical nugget of wisdom or sense of forgotten identity. Or maybe it's just to say: "This was me, I was here and I meant something once, to someone". 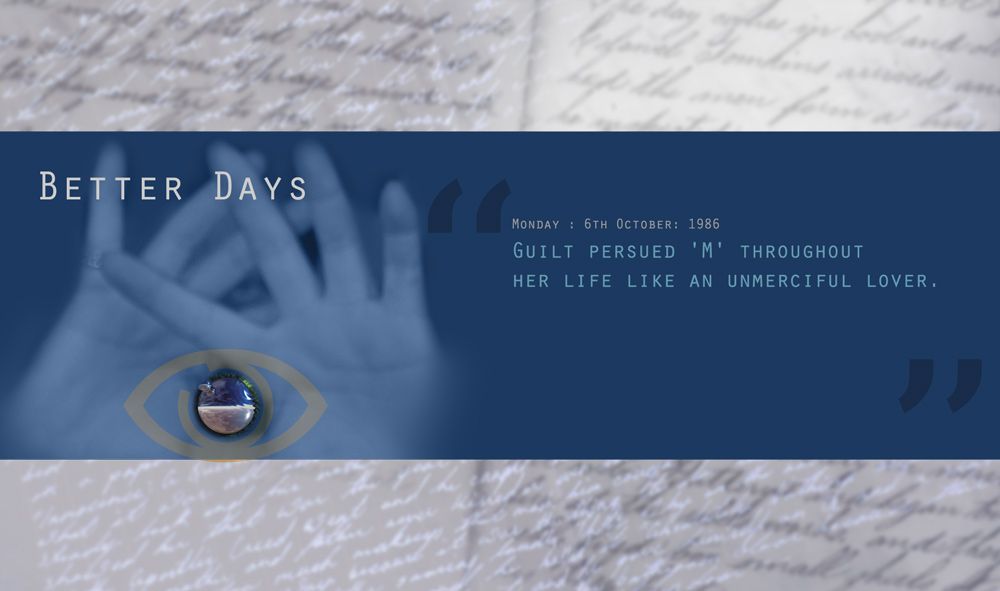 Opening
Opening a book or diary which lets the sun in, and fills the room with the scent of fresh print and autumnal static.

Fish Hooks
Saturday 29th July 1984
In which 'C' dreams of being lifted by a solid silver shark hook embedded in his chest. The following week he gives up on personal ad columns and late-night goat's cheese sandwiches.

The stoical side of breaking a bond but of never leaving properly. Putting it all down to life experience is all well and good, the past is forgotten easily enough when you can find a replacement, but floods back in when loneliness returns.

Action Man
He does it all 100 and 10 percent. Nope, you can't keep a good man down. He performs all the action others won't or can't exercise in public - and seems to enjoy it too. Energy barely contained.

Angels' Food
Friday 13th February 1960
Some decisions are hard to keep when you are continually reminded of what you did.

Destiny and Fate - the unheard scheduling of the heart by the angelic. It's not yours to keep unless you're prepared to own both the sorrow and the joy.

Happy New Year
Saturday 31st December 1977
There are key points or moments in our lives which make it worse to be on our own, such as; Christmas, birthdays and shared occasions of celebration. On New Year's Eve he thought of his ex and tried to picture where she was, what she was doing - and of course with whom. He understood that he was merely torturing himself under the spiritual guidance of alcohol, which made him less sharp but more instinctive. Watching the fireworks on TV he remembered her number and decided to call - just to wish a 'Happy New Year', that's all. At the second or third ring he caught himself in the mirror - just in time.

T and P
Tuesday 6th March 1951
In moments of post-vodka induced solitude, 'B' searched the walls of the kitchen and found profound answers to life
in his cookery books.

It was like an alchemist's cellar but full of light. His food books provoked thoughts that were deeply hidden until a particularly revealing recipe for rabbit rillette suggested a way in which he could improve himself.

Ecomouse
Tuesday 11th October 1993
A low bough scratches the dusty air and lets loose its burnt hands as an offering to the Humming God. We, of course, know nothing of this until it's too late.

Industry doesn't have a conscience, but you do.

Insurance
Monday 14th February 1994
Exposed by his emotions, 'L' could do little more than offer the sun and moon to a half-amused crowd of strangers who had now gathered around the kebab van.

We Radiate
Wednesday 21st August 1996
Sometimes a little sun is not enough.

Big Blue Car
Sunday 22nd June 1997
The vehicle by which we have no ultimate control, and yet can be steered by sheer will. 'K' only wished he could afford the full year's tax.

Freedom is not gained by forever wishing it. That is real disablement. Action is required where small freedoms are as important as the large. After all, wheelchairs are also vehicles - maybe this song has nothing to do with cars at all?

Closing
The diary gives up its last few words. Somewhere you may find yourself as empty as the end sheet in front of you. Your eyes are tired and the radio seeps back into focus. You need to stop its waspish chatter and go outside for a while. Maybe it's time to check the beehives again.

The air outside is sweet and dark like an old Ray Bradbury novel.