Outside looking in:
Big Blue Car is the musical vehicle for K P Williams, an English musician who has pitched his tent somewhere along the chalk of the South Downs and who still has no idea what style of music he is producing - perhaps you can help?

Inside looking out: Early inspirations
IT'S TAPE, BUT NOT AS WE KNOW IT: So... thinking about it properly for a moment, I guess it probably has to start with recording sounds on open reel tape during a school drama lesson. I remember the excitement of finding that you could play the recorded tape in reverse and at different speeds - this created new sounds from mundane ones.

THE AWKWARD LEFTY (NON-POLITICAL VERSION): I remember trying to learn to play acoustic guitar from one of those 'Play In A Day' books. No one else in my family played any kind of stringed instrument and I gave up pretty quickly because no matter how hard I tried my chords just didn't sound like the tune I was supposed to be playing. It took a while to realise I'd picked the guitar up left-handed (Satan's upside down), not for any reason other than it just felt more comfortable - Bobby Shafto sounded really bad but both I and Bobby were very much relieved when I realised why.

THE CALL OF SOS: At around 16 I started recording guitar using a pair of borrowed cassette recorders (one belonged to my Dad while the other was shared between my two older sisters). With these shoebox-sized machines I could record into one cassette and then hook the output through my cheap 10 watt guitar amp. This allowed me to play the first tape and guitar together and in turn record them coming out of the amp using the second cassette recorder. Limiting yes, but it opened up a whole new world of Sound On Sound recording.

DOING IT IN BROAD DAYLIGHT WHEN NOT EVERYONE LIKES IT: I continued to write and record by borrowing and hiring the ever-changing technology of the day: Akai open reels, 4 track cassette, 8 track open reel + desk, 8 track digital with virtual tracks, and on and on. This all changed when I joined a band (An American In Paris) in '85 until that fell apart in late '89.

I like playing live (mostly) but much prefer the hard graft of creating in a recording environment. Playing live always felt like a precarious balance of the good and the chaotic. I hated not being able to hear myself properly on stage but still loved the physicality and musical connection with band mates and crowd (again, mostly).

Apart from some very loose involvement with a few other bands and musicians after AAIP, I never particularly wanted to write as a cooperative again. It all felt like a compromise which made the process of writing slow and laborious, so writing by consensus is something I've shied away from pretty much ever since - but that's probably just my negative attitude and wanting to be in control, rather than anyone else's incompatibilities.

I've also supplied a smattering of commercial music for businesses and organisations. Early Big Blue Car music was featured in a futuristic in-car entertainment system design which appeared at the Chicago Motor Show. BBC radio also reviewed and had my stuff available online and it appeared in print for nationally distributed Making Music magazine (which was also included on that month's cover CD), but that's about it. I never wanted the hassle of getting a band together to play Big Blue Car live, so it has largely remained as my own cathartic exercise in writing and making music.

IF A TREE FALLS IN THE FOREST AND THERE'S NO ONE AROUND TO HEAR IT: And so here we are (took a while didn't it). After years of getting back on track with other important parts of my life, I still keep recording those little demos and loops. I still can't stop making little video captures of chords and melodies from mobiles, and  I still scratch out mini chord grids over the tramlines of my notebooks. But let's face it, that all seems to be a largely pointless exercise, doing something which can't even be shared, and if you can't share music - of all things - there's something wrong.

So I've decided to give some of my material a proper airing. I've probably got at least another two or three album's worth of new material and with a revamped studio setup I'm eager to re-engage and put out the best bits (sorting the wheat from the chaff) once and for all.

I'm hoping you think I have something of substance to share, but of course you might not - Sobeit.

Anyway, this site is the culmination of the created, collected and the distributed, sharing with you some of what I would consider to be 'The Wheat' of my ever increasing crop of ideas.

“The truth is, most of us discover where we're heading when we arrive.”

This is my head.
Sometimes it has a mind of its own.
It is both my failure and my success.
It may well be your success too.
It is always accessing, but occasionally inaccessible.
My thatch - unlike my patience - is thinning.
This is my lighthouse and my head. 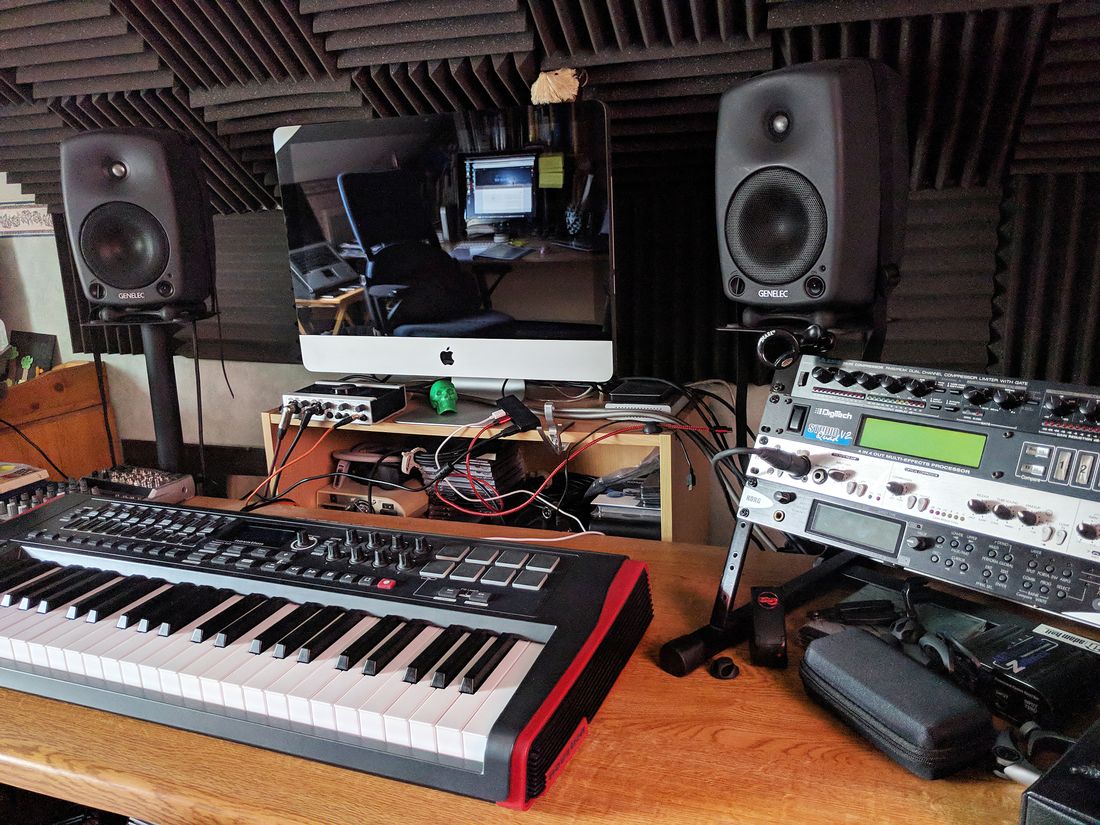 A QUICK AND FINAL NOTE

I make no apologies for the lack of (promotional?) mugshots on this website.
Like any good puppet master I'm much more interested in getting my words read and my music heard. This has little to do with getting my self seen. I appreciate this may seem at odds with the self-hype social machinery from the likes of Facepalm or Instafan, but there you have it. ;)