Under the bonnet of Everyday Things

The Masking of Everyday Things was inspired by a 'what lies beneath is often different to the shape it represents', thought.

For many years I've worked in the business of visual design and promotion of products and services. Ah yes, that old 'positively leveraging a brand' so stuff can be seen, bought and sold. This business would often leave me thinking that we lived in a world of self denial, false perceptions and an overwhelming supply of unimportant information.

I've often wondered; what would happen if all the branding and false messaging were just suddenly stripped away? I'm not imagining a utopian vision here - that would be far too dictatorial! No, more like just a massive de-branding of everything, where only the actual product itself is left visible without the soothingly wrapped, ripe images and Salespeak. What would we as consumers rely on for our buying decisions?

Please don't think I'm against 'pretty' things or form without function, I'm not. I just think we're too often manipulated by the mainstreaming of skewed messages as straight up facts or ultimate truths.

This thought came back to me while looking out at my back garden on a rare snowfall. I watched how over time the garden melted away from its green-brown to a softer, undulating white, eventually disappearing altogether.

Of course you still know what lies underneath the snow. But the shape and topography of the garden took on a different context, along with my attitude to it. And I liked that; the thought that it revealed something different while hiding the obvious and everyday I was so used to.

And people are like that too; for some time now I have found it difficult to decide whether I'm engaging with a snow-covered person or a wilfully exposed one. 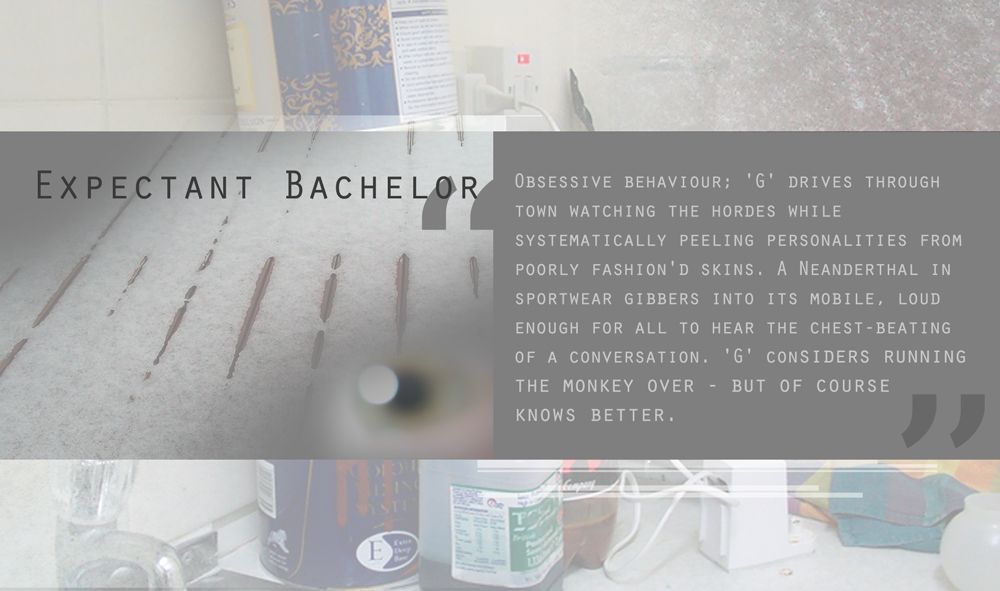 Harpo Gets Serious
I was playing around with this particular harp sample on the keyboard (I think it originated from a Korg K1) which just sounded beautiful. It turned into quite a melancholy little piece (drawn to the minor key again) and as I started playing around with the theme I imagined a Harpo Marx figure sitting in the corner of a large misted bathroom playing this to himself. He is illuminated by a harsh ceiling light and framed at the doorway by a dark room which broods behind it. It appears to me that his constant playing keeps something dark at bay, and he seems to be aware of this.

Expectant Bachelor
Obsessive behaviour. 'G' drives through a town's jungle watching the hordes. He systematically peels the personalities from poorly fashion'd skins. A tufted Capuchin runs across a tarry road hailing a taxi while a Neanderthal in sportswear gibbers into its mobile loud enough for all to hear the chest-beating of a conversation. 'G' considers running the monkey over but of course knows better.

Pride (of a pantomime cow)
What happens to old movie stars when they finally get retired by Hollywood? They often get embalmed, trolleyed out and fed to the press.

The old pin ‘n’ tuck movie star is wheeled out for a film ceremony. Onlooker ‘Q’ revolts at the assembled blind adulation. He hates the excesses of stardom and its consequence of the overindulged. He notices there are flies swarming around the ‘old cow’ as she moves slowly, grazing on her fans' sentimental frenzy.

Wonderful
Office life takes a turn for the worst when an individuals' only option to rise to the top is to seek refuge on the roof. After being followed by those of the HR and Marketing departments 'D' sings to them from his loud hailer - a Pied Piper for the new globalism.

Oilflow
A picture of liquid in slow motion like a thick sea, hangs on the reception wall. It presents a stunningly lit logo of bold corpocracy. Remember, if you let it, it will take more out of you than you can possibly take out of it.

Lo-Fi Loki
I remember I had some old Marvel comics (long gone) with Loki in them. After installing a VST version of an old Roland rack synth I got some of these nicely simple, outdated-and-harsh voices from it, and for some reason it made me think about the character of Loki, or at least the Norse version. He's the shape shifter, or a Jungian trickster who can't be trusted. A prehistoric Jack Frost (and not the indulgent Disney version). Loki is not just the ghost in the machine, he is much, much more sinister.

Driving Instructor
in 2001 I met a driving instructor who hated cars and Long-John Silvered to be a pirate on the open sea. He's the only Pirate-in-Waiting who doesn't know he's an albatross.

Star Machine
A character based on the book ‘The Lightning Cage’ by Alan Wall, involving an obscure 18th century poet detained at an asylum and his eventual 'release' through trepanation.

Crushed Pearls
Realise that you will be altered and bent by your experiences. Take charge and be strong because you will survive, you always do.

Exiting The Circle
The cycling picked guitar is a carousel. The horses are the four verses. The first is also the last. Everything is a cycle, everything has a rhythm. Which way is Out and where was the In?

Table No. 4.
I can't play piano well but I loved the idea of this slightly discordant, almost smoke-filled jazzy piano which performs the narration while a seated figure (viewed from outside the tall window) sits at a table in a small Florentine corner cafe. He is seated at the 4th table of a cluster of 18. The smoke-filled cafe/bar is winding down for the night. The figure is not clearly seen but his inner thoughts are most likely mirrored by the rise and fall of the piano.